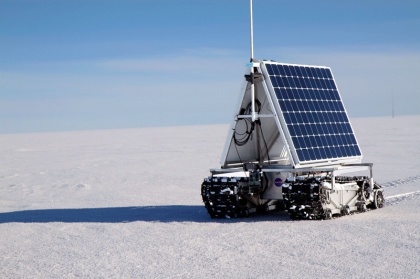 St. Paul, Minnesota. April 12, 2014. The GROVER, an autonomous robot built by NASA, was sent to Greenland for an ice measurement mission in May, 2013. SoliStat, a DC-powered temperature-controlled switch by engenity, LLC, was on board to ensure that batteries maintained proper temperatures for maximum longevity.

In the summers of 2010 and 2011, engineering students and NASA joined forces to design an autonomous land-roving robot at Goddard Space Flight Center. The GROVER, which stands for both Greenland Rover and Goddard Remotely Operated Vehicle for Exploration and Research, was the result of their efforts. The solar-powered robot, which uses rechargeable batteries to operate, was made to withstand rugged terrain, harsh environments, and many unknowns.

GROVER was set to rove around the highest point in Greenland equipped with ground-penetrating radar to measure layers of ice and snow accumulation, which NASA scientists would analyze for a number of reasons. This would be the first time the crew in Greenland used an autonomous rover, a less expensive tool than their usual methods of measurement: aircraft and satellites. With GROVER being unmanned and having to travel long distances in polar temperatures, it was important to plan for unknown weather. Michael Comberiate, System Manager, Emeritus, at NASA, notes, “Prior to operating in the field there were a lot of unknowns about the weather conditions we would have to face, so it was important to have a thermal control planned into the system design.”

engenity’s SoliStat, a highly reliable DC-powered temperature-controlled switch, was chosen to ensure the batteries remained warm. Reliability, range of set-points, and ease of installation were all key components that led NASA to choose SoliStat for the GROVER. Comberiate states, “The idea was to keep the batteries in a reasonable range around their peak operating temperature, to maximize longevity.”  The batteries, housed in separate insulated boxes inside each of the track structures, had to maintain a certain temperature or they would not run as long as needed. Comberiate explains, “We had thermistors linked in with the thermostats inside each box to achieve the desired temperature.”

SoliStat has operating temperatures from −40°F to 257°F, and is highly reliable due to its solid state construction. Once installed, SoliStat does not require any hands-on adjustments.  These characteristics made SoliStat a great choice for the unmanned Greenland mission. The GROVER conducted its ice sheet mission in Greenland in May of 2013 with the help of the students who originally designed the GROVER. Michael Comberiate was happy to announce that the mission was a great success, and no battery issues were presented.

NASA (The National Aeronautics and Space Administration) is the agency of the US government that is responsible for the nation's civilian space program and for aeronautics and aerospace research. President Dwight D. Eisenhower established NASA in 1958 with a civilian orientation encouraging peaceful applications in space science. NASA employs over 18,000 people, and is based in Washington, DC.

engenity, LLC is a group of designers and engineers with extensive experience in the development of consumer, medical, and industrial products who are dedicated to the design and development of application-specific electronic and electro-mechanical subsystems. engenity's current mission is to develop products based on current market needs.