One of the biggest ways that SoliStat stands ahead is its ability to function in extreme weather. Its advanced construction keeps it going in extreme temperatures and makes it both waterproof and particulate-proof for all practical purposes.

SoliStat excels in extreme cold, rated to operating temperatures as low as –40°F (–40°C). Most comparable bimetallic thermostats are not rated to function below 32°F (0°C), making them unusable in nearly any application that involves winter conditions.

Harsh cold is SoliStat's specialty, but it performs equally well in hot weather, with a maximum operating temperature of 257°F (125°C). 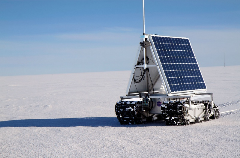 SoliStat's wide temperature range has been proven both in testing and in practical use. In one application, NASA installed SoliStat in an autonomous robot that was used in one of the world's coldest environments, at the peak of Greenland's ice sheet. The SoliStat endured temperatures down to −22°F as well as harsh winds and other unpredictable weather conditions, all while maintaining a constant normal function. (You can read about SoliStat's use in NASA's Greenland Rover at our GROVER case study page.)

We have also tested SoliStat's ability to function in these conditions in our lab. We tested two SoliStat units at either extreme of their rated temperature range, one in a temperature chamber kept at –40°F and one in an oven kept at +257°F, with each SoliStat drawing its maximum rated current (in this case 10 amps, though models are available for up to 30 amps) to switch a band heater (on 0.5 sec, off 2.0 sec). 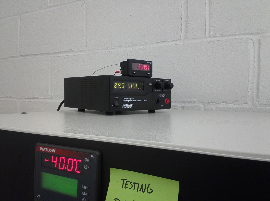 Test counter at over 1.2 million cycles.

Both units functioned normally for over 1,200,000 switch cycles, switching the heater continuously every 2.5 seconds for over a month until we discontinued the experiment. (We continued to run these units at room temperature afterwards. They eventually accumulated over 3,000,000 cycles, and have shown no signs of burning out. You can read about the testing at our product life testing page.)

Another top source of equipment stress is wide temperature swings, and we have tested SoliStat for its ability to endure these. In our experiment, we cooled a SoliStat unit to −40°F, then heated it to +257°F, in a repeated four-hour cycle, for 36 hours. We then took this unit and tested its ability to switch a heater. Despite the temperature stressing, the unit's function was completely normal.

Resistance to water and particulates

SoliStat's sealed nylon housing makes it functionally impermeable to the elements. It is rated waterproof to IP67, meaning it is entirely dust-proof and can be splashed and even submerged in water. This eliminates concerns about mounting your thermostat where it will be out of the rain and mud: the SoliStat can almost certainly endure any conditions that the machine it's mounted on can.

We have tested this qualification in our lab as well: in an experiment running a SoliStat completely submerged in water for 72 hours, the unit continued to function normally for the entire experiment.

SoliStat is built from the ground up to withstand not only harsh weather but also several kinds of electrical interference. Most comparable switches are unprotected against these problems, another reason SoliStat is able to last so much longer than other switches while maintaining proper function.

Electrostatic discharge, in the form of static electricity, can enter unshielded circuits and render components inoperable. Many thermostats leave their simple microprocessing chips unguarded, leaving them vulnerable to bursts of ESD during installation or operation, and putting the chips at risk of being blown. SoliStat's circuitry guards against ESD and keeps it away from sensitive components. The same circuitry also protects SoliStat against sudden electrical surges, like those that can happen on engine startup or at unpredictable times during normal battery operation.

Electromagnetic interference: Any electric device generates electromagnetic interference (EMI) that can interfere with the operation of other devices, especially vulnerable components such as circuit boards. This EMI can lead to unpredictable operation or failure. SoliStat's housing is constructed to guard against the entry of EMI into the circuits. Laboratory testing and, more importantly, extensive field use, show that SoliStat withstands EMI levels normally found in the harshest industrial environments.

Counter-emf (where "emf" is electro-motive force) is a short, reverse-polarity "kick" of current, generated at switch-off by heavy inductive loads such as large electric motors, due to the dissipating magnetic field. Counter-emf can damage circuitry in much the same way as ESD, and the same construction that guards SoliStat against ESD also shields it from Counter-emf.

To order, get in touch with a distributor today.

Or contact us directly to request a quote or a sample.

Find a Distributor and Order »