SoliStat is the solution for temperature control switches that burn out over and over. Its solid-state construction eliminates the mechanical problems that cause burnout in other controllers, meaning that SoliStat lasts many times longer than comparable devices, and burnouts are no longer an issue. 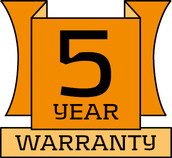 engenity offers a limited 5-year warranty on each SoliStat we make – an unprecedented guarantee in a field where most current products can only be relied on for as little as 6 to 9 months.

We've tested SoliStat's lifetime in our lab so we can be sure we're offering a product that will really outlast the rest. We set up two SoliStat units at either extreme of their rated temperature range, one in a freezer kept at –40°F (–40°C) and one in an oven kept at +257°F (+125°C), each one drawing the maximum rated current (in this case 10 amps, though models are available for up to 30 amps), to continuously switch a heater (on 0.5 sec, off 2.0 sec), for as long as the units took to stop functioning. Even at these extreme conditions, the SoliStats operated consistently, and a digital readout kept count of how many cycles they had completed.

While comparable thermostats are often rated to run 5,000 or 10,000 cycles, both SoliStat units ran for over 1,200,000 cycles with no failure in sight at the extreme temperatures – a total of over a month of continuous switching, comparable to years of service in the field – until we discontinued the extreme-temperature experiments. After removing the units from the freezer and oven, we continued to run the same test with these units at room temperature, and both units, as of writing in October 2014, are still functioning after over 3,000,000 cycles each. 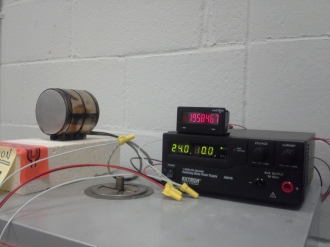 The conventional thermostats used for many industrial applications work with a bimetallic strip that bends back and forth in response to temperature changes, closing a circuit when the strip bends enough to touch a contact. This design leads to electrical arcing between the strip and the contact when the switch opens and closes.

Arcing is not as much of a concern in AC circuits, where the switch has a good chance of opening or closing during a low point of current in the AC cycle. But in DC circuits, the current is at a constant level, and every time the switch opens or closes, an arc is likely to form. Over time, all this repeated arcing causes pitting and corrosion on the contact, leading first to intermittent operation and then to failure of the thermostat.

SoliStat's solid-state construction eliminates arcing entirely. Inside the unit there are no moving parts to wear out or become corroded. The current is switched by a transistor, and the temperature is detected by an RTD (resistance temperature detector), which translates temperature changes into electrical resistance rather than physical motion. With no moving parts and no arcing, there's nothing in SoliStat to wear out.

Its components mean that SoliStat can also be constructed so that it is hermetically sealed, allowing it to resist the elements. And it's highly resistant to other common electrical problems that reduce the lifetime of thermostats. You can read more about the construction that makes this possible on our page on SoliStat's durability.

Put SoliStat to Work for You